Blog 115: What You Should Know About ARFs

Blog 115: What You Should Know About ARFs

Welcome, and thanks for checking out Informed Decisions Blog. Over the past couple of weeks we have focused on managing finances in later life. Last week we explored the 2 options many of us have when we get to draw our retirement funds, Annuity or ARF.

Seeing as it currently accounts for the majority of retirement income strategies it will form a large part of coming weeks. We will be exploring how one can attempt to maximise the income one gets from an ARF. Make sure you stay till the end because we will also be exploring how you can aim to ensure that your ARF lasts at least as long as you do – and hopefully longer, potentially leaving a sizeable legacy to loved-ones.

This week we will now share insights on some really important aspects of Approved Retirement Funds (ARFs). I was being a little cheeky calling this ‘what you should know about ARFs’ but I do honestly believe these are the basics. I also believe that knowing these fundamentals will help, whether you already have an ARF, or will have one in the future.

We will determine how ARF-income is taxed, how it is handled on death, and explore how you can maximise the income you get from your ARF. This latter element is an entire science on it’s own however I will intro the main aspects to consider.

Before I do that wanted to draw a little focus to the absolutely ludicrous situation going on at present in State Pension reviews. There were tweaks to pension calculations made in 2012. The impact of this is that those who are 73 or older as of this year.

The result of the tweaks is that many of them lost out on full contributory pensions as a result of taking time out of work over their life-times. This was either due to voluntary time-off or as a result of the State marriage bar. The infamous marriage bar prohibited women from working once they got married. As bizarre as that sounds today it was very real, only disappearing in 1973. It applied to all Public Sector roles and majority of private sector companies also.

Anyway, the heel of the hunt is that there are tens of thousands of people whose cases are/have been reviewed but only a small fraction of them are getting the increases that people believe they are due. It’s a total mess. It is also an example of why, if we have the capacity at all, that we really are well served having our own retirement planning structures in place. Which brings us nicely back to the topic at hand, ARFs!

How Much Can/Must I Take From An ARF?

There was another ‘tweak’ made in the Finance Act 2006 which essentially forced an ARF-owner to draw at least 4% per year from age 61 (or 60, if born on 1st January) from their ARF. You have the option of not taking the 4% out of your ARF, but you will pay tax as if you had. This will likely mean you will pay tax on those funds again next year too. The result is that vast majority take it out. Up until 2006 one could hold funds in an ARF and not take anything from it – allowing it to accumulate and grow in line with the underlying funds. However Revenue must have seen this as dead-money and so decided to force ARF-holders to take income from it – therefore increasing the tax-take for the state.

When you reach 71 (or 70, if born on 1st January!) the 4% increases to 5% for the rest of your life, or until the fund is gone. This flies in the face of a lot of the research which suggests that spending in later life decreases by approximately 1% per year – in real terms. This suggests that inflation-adjusted spending will decrease by 1% per year, i.e. it might increase each year in line with inflation but it will decrease in real terms – which might sound silly, but if you think about it’ll make sense!

Oh, if you are fortunate to have more than €2m in your ARF you may feel somewhat unfortunate as, you will be forced to draw 6% of that each and every year from age 61 for the rest of your days.

These minimum % values are commonly referred to as ‘imputed distribution’. Interestingly when I look it up I’m told that this word comes from the Latin word ‘imputare‘ which is to ‘think’ or to ‘calculate’. I’m not sure who was doing the thinking or the calculating when they came up with these minimum %’s that must be taken from the age of 60, but that’s another days’ work!

Can you take more than 4% from your ARF? Absolutely you can. You can technically take as much as you wish in any one year, up to 100% of the balance! I should note that most Insurance companies will apply a maximum % in any one year, after which there may be penalties. This is more-often than not due to their need to recoup up-front commissions paid to the intermediary or advisor on the initial sale of the product to you in the initial 5-7 years of your plan. Likewise, if you transfer your ARF out of an insurance-based version to another provider or Qualifying Fund Manager (QFM) in the initial 5 years, you will be hit with the same penalty, for the same reasons.

What Tax Do I Pay On My ARF Pension Income?

If you had a €1m ARF (see Blog 81) that would equate to €40,000 of taxable income. It may seem an obvious point to make but any income from an Annuity or an Approved Retirement Fund are assessed under PAYE. For that reason you really really should send your up-to-date Tax Cert to your provider to ensure that the correct tax is being taken and that you are paying the correct amount of tax on your ARF. It can often be worthwhile to contact your local tax office to check if you have any un-allocated tax credits or cut-off points that can be allocated to the provider paying you your ARF income – definitely worth a phone call!

From 2019 the new ‘PAYE Modernisation’ has come into force meaning we will no longer be receiving P60’s for tax years after 2018. Instead we are supposedly getting ‘End of Year Statements’.

What Happens My ARF When I Die?

Below is a simple table which shows how Revenue will tax (or not) the ARF benefits you might pass on when you die. Depending on the relationship there will be a 0% to 73%. If you pass away and your spouse survives you they can essentially ‘step into your shoes’ and begin taking the income from it. They will pay Income Tax on the income they receive going forward but no taxation on the transfer to him or her. If the ARF passes to a stranger the taxation can be huge, as they may be subject to marginal rate Income Tax (40%) plus Capital Acquisitions Tax/Inheritance Tax of 33%.

How Long Will My ARF Last?

Now we get to the really fun bit! This, as I mentioned earlier, is a science in and of itself – but I am delighted to share with you a couple of key points, based on scientific research and no shortage of hard and reliable data.

See the graph below. This shows a €1m pot from which an income of €40,000 is paid each and every year. You are paying 1% in fees in this example, and your annual income is increasing in line with inflation.

This graph is showing you the investment journey that has been achieved starting at every year of investing over the past 115 years. This graph is showing all of the outcomes you would have met had you began your ARF journey in each of those years – and importantly shows you the Average outcome. Across all these scenarios, the average or median outcome was that you would have run out of money in your early 90’s. The worst case scenario was that you ran out at 82 years of age (that was if you had began drawing in October 1968!).

If your objective at the outset, retiring at 60, drawing €40,000 per year, and have it increase with the historical rates of inflation over all these periods, and hoping to live till 100. Your plan had a 38% chance of success! I’d like to clear up some confusion here (even many advisors don’t seem to register this); the 4% we are taking is €40,000 each and every year, and that €40,000 is increasing in line with inflation. It is not that we are taking 4% of the pot each year, so if the pot is up my 4% is up and if the pot is down my 4% is down – we are taking €40,000 every year. Don’t ever let anyone confuse you about that significant aspect of retirement income!

What Should I Invest My ARF In?

What I haven’t mentioned yet is that this scenario is based on an ARF which invests in 40% Global Equities and 60% Global Bonds. By any standards this would be classed as a Conservative fund, much like the ones we most commonly see people in their 60’s have. Let’s see if that was the prudent place to be….. 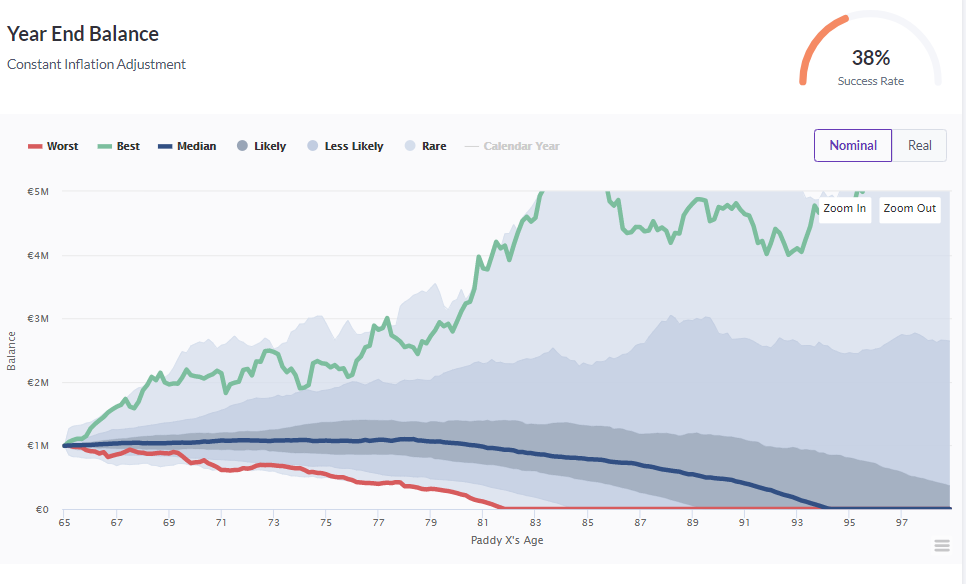 Now I want to show you another graph, the same initial amount, the same annual income, the same total fees, the same income increase in line with inflation. The biggest difference here is that you are not invested in a conservative fund. 90% of your ARF is invested in a well diversified blended equity strategy with the remaining 10% invested in Global Bonds. 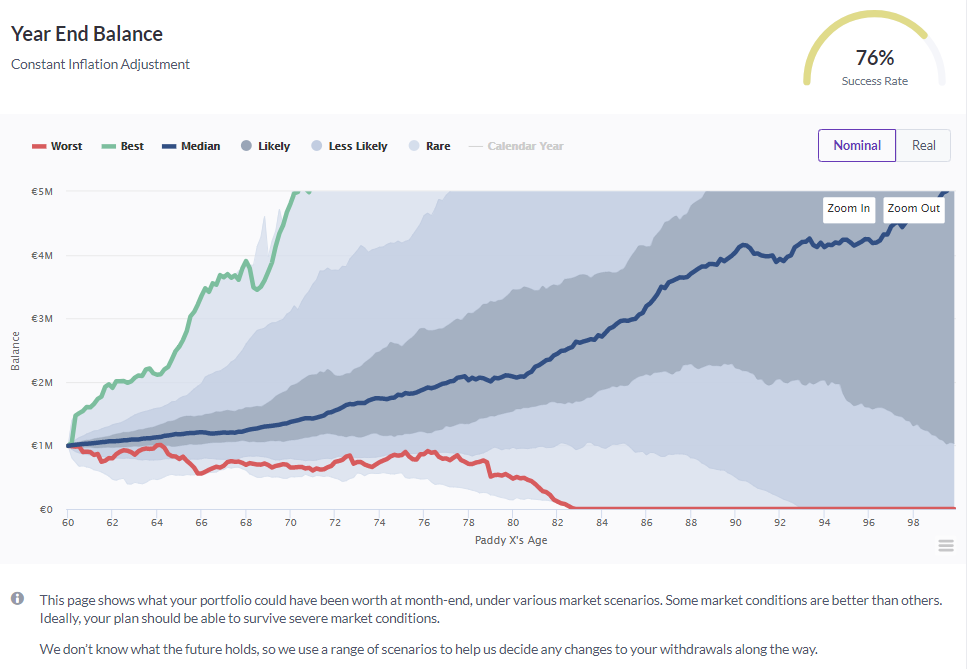 What you will observe here is the Median (the blue line) increases over time. Despite taking 4% (inflation adjusted) every year, the historical growth rates over the past 115 years have resulted in a very different outcome on average. Again you will see that the worst case scenario, this time if you began drawing in December 1969, resulting in you running out of money in early 80’s.

The plan of reaching 100 years of age with the €40,000 increasing each year now has a 76% chance of success. It was exactly twice as likely to be achieved as in the first example. The biggest difference here is however that the median outcome, if we drew €40,000 every year from the pot, and increased that each year in line with inflation meant there was a legacy of €4m at 90, of €5m at 100!! Nobody wants to leave that much, so we could obviously have afforded to take far more than that and still been really comfortable!

What should I have invested my ARF in? I’ll let you decide for yourself which was the better outcome.

Love to hear your thoughts, feedback or questions. You can reach me here.